I made this Cranberry Apple pie for my church’s bazaar. It will be served as a dessert with the lunch at the bazaar. It looks and smells soooo good! Unfortunately I will be out of town for a conference and won’t be able to try it. 😦  I have got to make another one so I can have some. 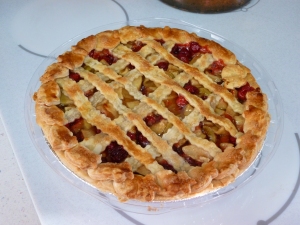 I carved a couple of pumpkins last night. One was Rapunzel and the other was Linus in the pumpkin patch.

I realize you see Linus and a hole with a skull in the middle. That’s what happens when you make one wrong cut on Rapunzel. Half her face falls off and you wind up with a big hole with a skull shoved inside. You can’t see it but there is a light in the skull so it’s eyes are glowing. I’ve had a lot of compliments on the pumpkins, especially Linus. A couple of guys thought it was a rug rat, which made me feel a little old. The candle in Linus is a cinnamon scented votive so my porch is not only sporting a cute pumpkin, it’s also adding a little aromatherapy!

As usual, not the best pictures. I need to take a class or something.

IMAGINATIONS are fed with LIGHT, COLOR, and DIRT.

Learning to be a great teacher

launches a project every month

From the Santilli Kitchen to Yours!

Showing you Creative Ways to Cut Back on your Budget

A joker-singer-writer-crafter that also likes to bake.

Why its important to be crap
MJ's Comprehensible Input

For book reviews and suggestions for recreational reading in Spanish

WordPress.com is the best place for your personal blog or business site.